Thankless in Death
By Kimberly Monaghan on November 3, 2019 in Books 4 Fun 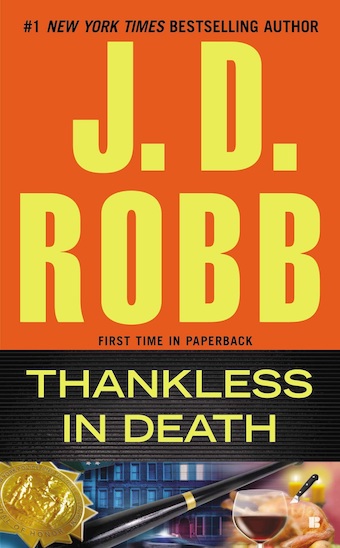 Lieutenant Eve Dallas is back at it again, diving deep into a compelling mystery. This time she’s on the heels of a cold-blooded killer, who after brutally slaying his family, has acquired the taste for killing and is bent on getting revenge on everyone who’d ever stood in his way. As she tries to track down the killer she works through his mindset, unearthing the psychology behind motive and desire in her quest to pre-empt his next move.

But he’s always one step ahead of her, fed up with all who’ve misjudged him and on a blood-soaked path of vengeance. And now that he’s got his parent’s money, he’s invested in a complete makeover, an upscale apartment and a high-end lifestyle that will add to his enjoyment as he hunts down his next victim.

What I love about this book is that it’s an enticing suspense and one of the best-selling ‘In Death’ series of books by J.D. Robb. Despite the fact that I unknowingly jumped in the middle of a series, I was able to understand the character arcs and the overall series’ storyline. I also loved all the characters, even though I wouldn’t say ‘love’ to describe the killer, but it’s impressive how Robb can get into the head of a villain who’d just snapped and is on a path of sadistic revenge. Is it weird to say ‘kudos?’

What I didn’t get was why it was set in the future. I didn’t feel like that added anything to the story, and I was confused by the technology references like ‘Links’ and ‘Comps,’ but will chalk that up to the fact that I skipped to the middle of the collection.

But most of all I love Eve Dallas. I mean, who doesn’t love a bad-ass female protagonist who is raw and very real and is on her own personal journey of balance between love, family and her passion for fighting crime. Her boyfriend Roarke and other major players like Detective Peabody, Charlotte Mira, Ian McNab and Commander Whitney, return in this 37th installment and are just as robust in their own story arcs, personalities, journeys and struggles.

If you’re looking for a thrill ride that will make you lose sense of time, start with Midnight in Death and just keep going. Enough said. And yes, I have a lot of reading to do.

The Governess
Careers For Creatives?